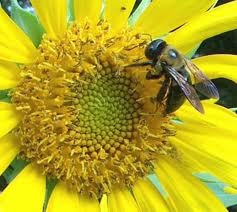 City bees show a richer diet than bees from farmlands
next >

Bees in urban and suburban settings have a richer, healthier diet than bees in farmland settings, say researchers.

Honeybee hives from 10 National Trust sites were studied in an attempt to assess the link between bee health and the diversity of pollen they encounter.

Bees from farmlands showed a distinctly narrower range of pollens than both urban and untouched "natural" settings.

The find is part of the Bee Part Of It campaign being run by the BBC and the National Trust.

Hives from Kensington Palace in London showed evidence of eucalyptus and elderberry, while suburban sites such as those around the University of Worcester - where the researchers who carried out the study work - showed a rich mix including lily, blackberry, rowan trees, and oilseed rape.

However, at more rural National Trust sites near farmland in Yorkshire and Somerset, the hives were overwhelmingly dominated by oilseed rape pollen. 'Useful information'

Matthew Oates, and adviser on nature conservation to the National Trust, told BBC News that although the results were no great surprise, they were "a very useful piece of information in terms of being able to quantify the problem that bees are up against in intensive agriculture systems".

"What is clear is that there is a far greater range of plants in urban and particularly suburban settings than in many of our contemporary agricultural landscapes," Mr Oates explained.

"There really is so little forage for bees in those modern internsive farming systems."

The next stage of the Bee Part Of It campaign will aim to assess the effects of pesticides, analysing what residues can be found in hives. That, Mr Oates says, will determine if bees are "unscheduled victims of pesticide use aimed at genuine pest insects".